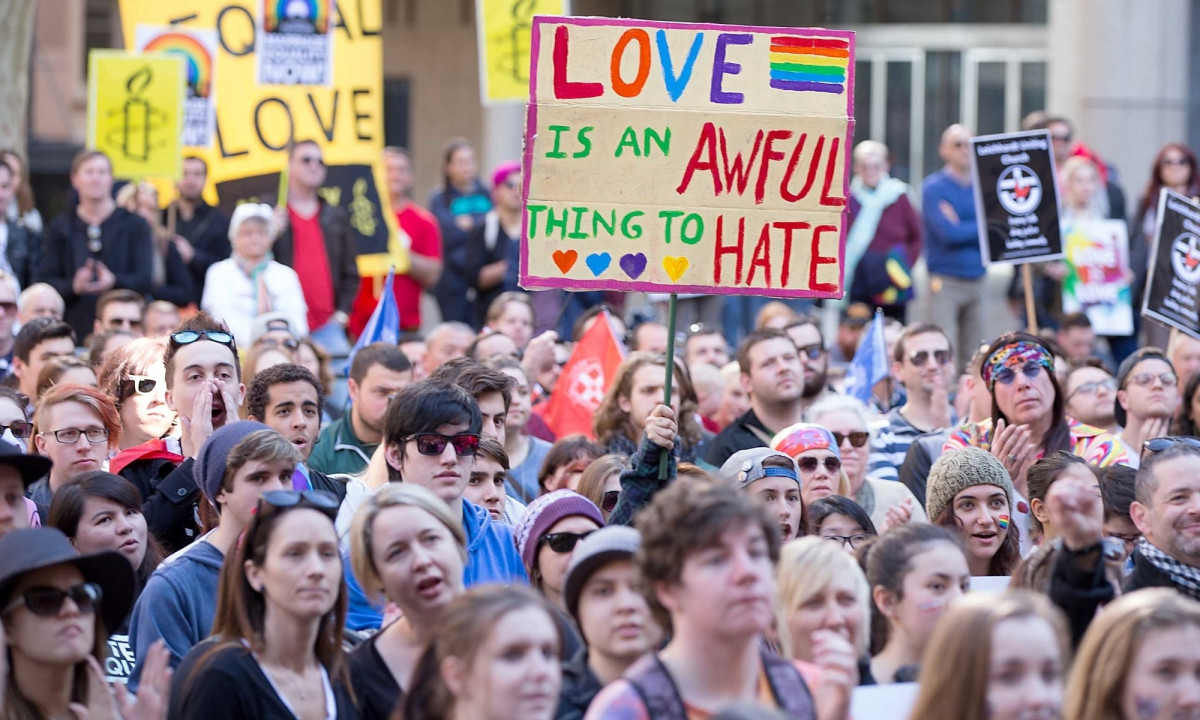 In this emotionally charged debate I want to try to look objectively at some of the arguments proposed.

The Marriage Act (1961), as amended, is the Act that regulates marriage in Australia. It applies throughout Australia; and any law made by a State that is inconsistent with this Act is invalid. This priority is given to Commonwealth under powers granted by the Constitution.

The Family Law Acts of 1975 and 2009 diverged from the Marriage Act, and are crafted to protect the interests and property rights of people in relationships. These Acts treat de facto relationships, including same-sex, polygamous and polyandrous relationships as marriages for the purposes of determining the rights of the people involved at the time of separation or death.

The Marriage Act (1961), as amended, is very different, and particularly since the Marriage Amendment Act 2004. It now has a constrained view of marriage, and only recognises monogamous, heterosexual marriages and does not recognise any other forms of union, including traditional Aboriginal unions. Overseas marriages are only recognised if they conform to the criteria of the Act.

What if we still had the 1961 legislative regime?

In my opinion we would have same-sex marriage today. By now, common law would likely have recognised such relationships as marriages. There would have been some High Court rulings or challenges, and the law would have moved on.

But, of course, we don’t have that regime. Because of that we now face making legislation to overturn previous legislation, which in itself changed earlier legislation. Or, we could do nothing at all, and leave matters as they are. This is the nub of the debate.

In developing their arguments, proponents of one side or the other are making some outrageous assertions. Some of these need examination.

Point one – marriage has nothing to do with religion

A heterosexual couple may go their favourite place of worship, and have a priest, imam, rabbi or whatever declare them to be married. Well, they are not. Unless that individual is legally empowered to complete the required compliance and notices, it is not a marriage recognised under law. All legally recognised marriages in Australia are ultimately civil unions.

Consider this – around 70% of marriages in Australia are performed by civil celebrants.

Point two – marriage has nothing to do with procreation.

I have a friend, who is approaching fifty, and she has decided to marry. Given she is beyond her fertile years, there obviously won’t be any children.

I have some other friends who have been married for around forty years. When they married they did not want to bring children into a world they were worried about, and nor have they.

I have yet another set of friends, who after living together for a while decided to start a family. They agreed with each other that they would get married once the family was under way. To their dismay they discovered they had fertility problems, in fact, such problems that meant they would never be able to have children. They elected to get married anyway.

To suggest that marriage is about procreation is a furphy, and an objectionable and possibly distressing one.

Point three – marriage has nothing to do with children and family

There are many children living in same-sex family arrangements today.

Aside from adoption, some of these families include biologically related children from previous heterosexual relationships, surrogacy and sperm donation.

The idea that every child needs both a mother and father figure may well be true, but the fact is that many children today live in single-parent families. Many of these children do not have the benefit of having both these figures.

Logically, if you follow the proponent’s argument to its end-point – reductio ad absurdum – you must conclude that all children must only be raised within a family defined by marriage.

Consequently, you must consider that children in single-parent or single-sex families should be removed, and placed in the care of married couples. Further, if married couple families is the desired end state, then you will need to move the children in de facto relationship families too.

This argument is ludicrous.

Consider this also: there is no evidence I can find that suggests children in same-sex families are any more abused, disadvantaged or at risk than any other group of children. In fact, the reverse seems true. Whilst the traditional family seems to be the best way to raise children, remember that some of the most egregious child neglect examples come from such families too.

Point four – your view on marriage does not define you

One of the worrying things about this debate is one side’s automatic presumption of prejudice and homophobia if you are anything less than a strident supporter of their position.

This is arguing ad hominem, or, in football parlance, playing the man, not the ball.

Such argument does nothing to advance the matter, and actually makes it worse. If you are arguing a case for fairness and equity, then you had best be an exemplar of these qualities.

Point five – marriage equality has nothing to do with religious freedom

Australia is a secular society. This is enshrined in the Constitution, which clearly defines a separation between Church and State, but explicitly grants freedom of religious worship.

Amending the Marriage Act cannot affect religious freedoms. Only the secular, legislative meaning of marriage could change. Any law cannot interfere with the religious meaning of marriage, or a major Constitutional issue will arise, because it will be in conflict with existing provisions. The Constitution prohibits the Commonwealth from interfering in religious matters. It should be noted that similar provisions prohibit the Church from interfering in Commonwealth matters – a fact lost on some of the advocates of this argument.

To be fair, marriage equality will solve some Family Law problems, but only for same-sex couples who choose to marry.

Despite a broader view of relationships, the Family Law Act has some big drawbacks. The biggest issue is burden of proof. The de facto partner needs to prove the relationship. The wheels of bureaucracy will move much quicker if you have a marriage certificate. In some cases there are time constraints that mean the de facto partners can be overlooked or even over-ruled.

For example, determining next of kin to authorise medical treatment, or to arrange a funeral is a problem. The provisions of the Act often apply in fraught situations like this, and can seem like discrimination against de facto relationships. But, note this, despite its shortcomings, it does not discriminate against same-sex relationships.

A change to the Marriage Act will assist processes under this Act, but it won’t substantially grant anything more than currently exists. What it won’t do is resolve the broader issues that confront de facto relationships.

The Australian Bureau of Statistics has publications that look at the census data and comparisons. They paint a picture of Australia that is somewhat at odds with populist views. It shows us to be a very diverse society, particularly relating to family, relationships, and religious practice. Which, of course, are the main pieces of the puzzle behind this debate.

A yes vote won’t open the floodgates to same-sex relationships, and nor will voting no act as a disincentive. People will do what people want to do.

Regardless of how the vote turns out, our society will inexorably move onwards. The real question is whether legislation should keep pace, get in the way, or get out of the way.

There are resources available that support one side or the other. If you want to justify your position then all you need to do is go the web and do a search for your side of the argument. You will arrive at sites that will have a selective and carefully curated set of arguments that absolutely support your position. Some of these arguments may even be backed up by carefully chosen facts, but the majority don’t seem to be.

If you truly have an open mind, or are just concerned about the ramifications of such a change, then I suggest there a few things you might do.

First, read the Marriage Amendment Act of 2004, because this is the thing we are considering changing. It is not a difficult read, and once you read it you will be in an interesting minority. I am amazed at how many people I have met with strong opinions who have not actually read the thing they want to change or keep.

The next thing to do is spend some time at the Australian Bureau of Statistics site, looking at the census data and comparisons. From this you should get an idea of what Australian society looks like today – and it isn’t as vanilla as people would have you believe. Right or wrong? Doesn’t matter, because it is what it is.

Once you understand what is being considered for change or retention, and put that against a backdrop of today’s Australian society, you might then be in a position to make a decision.

For every complicated problem there is a solution that is simple, direct, understandable, and wrong. H.L. Mencken

why we are having the marriage equality debate

This is why we were never going to have marriage equality debated in parliament and put to a vote in the normal way.