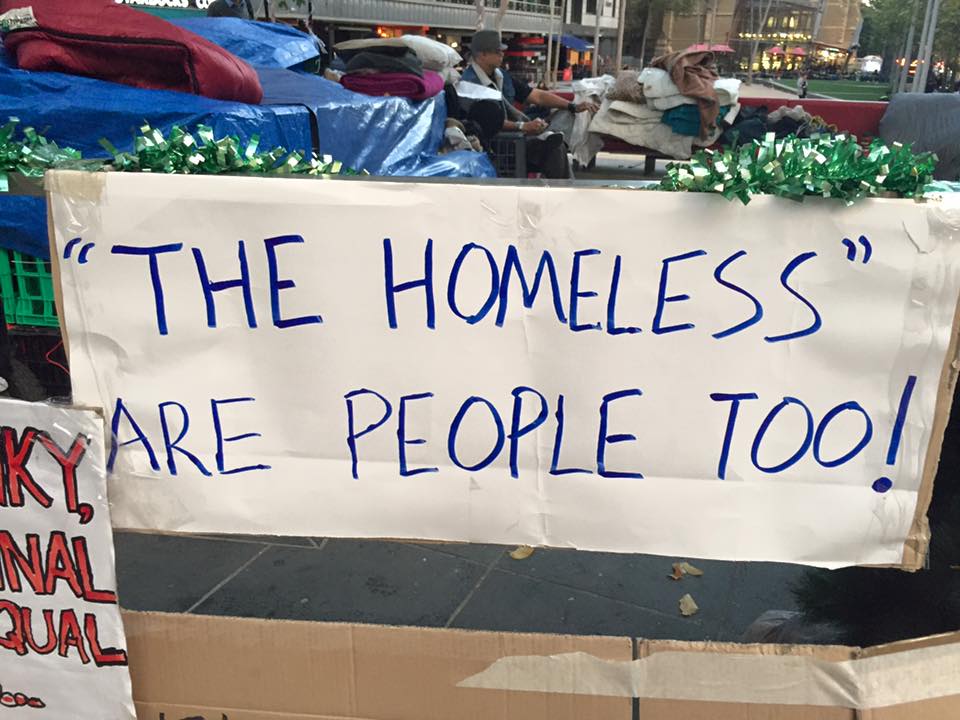 Tonight I did something I have never done before. I sat down, took time, and spoke to one of our homeless people.

I am ashamed to admit I noticed him initially only because of the very sad-looking dog he had with him. I walked to and from my Melbourne hotel several times today and he was always there. I was quite prepared to dismiss him, as many of us do, because he looked like a druggie, and had a dog to attract the attention of people like me.

If you saw “Australian Story” last night, and were taken by the story of “Mouse”, then you might imagine what was going through my mind.

This guy is no Rhodes scholar. He only went to high school till he was fifteen. He is dyslexic. He says he wasn’t abused as a child, but did come from a broken home where no-one set him up with life skills. He has been in trouble with the police for vagrancy. He is just a misfit.

I am no social worker, but it seemed to me that he could do better that sleeping rough on the streets of Melbourne on the mid-winter night. Unfortunately, he doesn’t do forms well, and getting housing needs forms. In fact, any assistance needs forms.

He relies upon the good deeds of the Salvation Army, mainly.

After we spoke for about 30 minutes he said I was the only person he had spoken to in the last three or four days, other than government officials. Speaking to these officials was problematic for him, because he had to leave his only friend, his dog, tied up outside.

He was assaulted last night outside the hotel. I asked if he was OK, and had he gone to a hospital. He told me he couldn’t go to a hospital, because they had forms, and besides which, he would need to leave his only friend outside.

I write this now from my nice warm and cosy hotel room.

I gave him all the money in my wallet. Has he bought drugs and shot up? Maybe. Is he laughing at me as a soft touch? Maybe.

But I believe that if we think in those stereotypes then we won’t understand the problem. We also won’t find a solution to them with this thinking. This is not a political issue, this is a societal issue.

In this post, I want to exercise the idea of decision timeliness. The question is whether it is better to wait to make the right decision, or to give an adequate decision now, and refine it later.

how to prove you are a fool

‘Tis better to remain silent and be thought a fool, than open one’s mouth and remove all doubt. Samuel Johnson